Creative types have been seduced by the idea for generations, but do you really have to be an insomniac to make great art? 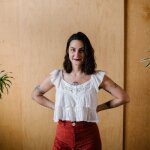 When Ashtyn Sibinski, a Minneapolis-based painter, was in art school in 2012, she would often stay up late, working in her studio until 3 a.m. “It was part of the culture there,” Sibinski says. However, these days her creative sweet spot hits around 7 a.m. after a good night’s sleep.

Looking back, that had always been when she was at her creative best, but stereotypes around art, inspiration, and sleep are hard to shake. From Vincent Van Gogh and Louise Bourgeois to Beyoncé, countless artists have famously struggled with sleep.

But these high-profile cases bely what science shows us: Despite popular anecdotes (and even some studies that have explored the link between insomnia and creativity), most research reaffirms the value of sleep in fostering our creative juices.

But, how exactly does sleep impact creativity? How can creatives find the right balance? We interviewed five artists and two sleep specialists to find out.

What science tells us about sleep and creativity

The first thing to know about the science behind sleep and creativity is that there’s not a lot of it. “There are a few studies that show a link between REM sleep and creativity, but not many. There are four or five main studies and we keep citing the same studies over and over,” explains Célia Lacaux, a sleep researcher at the Paris Brain Institute.

A 2004 study found that eight hours of sleep boosted insight, “but surprisingly no one used this research to try to understand which sleep stages could be important,” Lacaux says. So, she and her co-authors did exactly that. What they discovered is that the onset of sleep is a creative sweet spot.

The researchers divided 103 participants into three groups. The first group stayed awake while the second group got roughly one minute of N1 sleep, the first sleep stage. The third group slept just long enough to get a few minutes of N2 sleep, the stage that follows N1.

They then tested the participants’ creative problem-solving by showing them an eight-digit math problem. There was a longer, methodical way to solving each problem, but also a hidden rule that the answer was always the second number. The group that stayed awake performed better than the group that entered N2 sleep, but “the probability that someone would discover the hidden rule was tripled for those who had even just one minute of N1 sleep,” Lacaux explains.

This points to the hybrid N1 zone that exists somewhere between sleep and wakefulness as being a potential hotbed for creativity, but “we don’t know why yet,” Lacaux adds. While N1 might be the sleep stage most conducive to creativity, there’s more to it than that for most artists.

Like Sibinski, Jayme Markus, a graphic designer and embroidery artist in Chicago, has also come to discover that adequate sleep is vital to her creative process. “I go to sleep around 11 p.m. and wake up around 9 a.m.,” she says. “I’ve realized that I really do need that amount of sleep.”

For Kara Nesvig, a writer based in St. Paul, Minn., sleep is also “super pivotal” to the creative work she does. It’s not just getting good sleep, but following good sleep hygiene practices, too. “I can always tell such a difference in the nights that I unwind with a book versus looking at my phone and watching TikTok,” she says.

What the sleep experts say
Colleen Ehrnstrom, Ph.D., a clinical psychologist who specializes in insomnia, explains that every brain is different — that we should work with our bodies’ natural cycles, but resist exerting overt control. “Trying to control any one night of sleep is like saying we can control our appetite,” Ehrnstrom adds. “We have rhythms to our day and these rhythms are something that is innate. A lot of what we promote in sleep work these days is balance as much as consistency, and acceptance that there’s natural variation.”

Define your creative time to shine

Medora Frei, a painter based near Bismarck, N.D., took up abstract painting in 2019 after a particularly stressful stretch of her life. “I was having a lot of fear and anxiety at night,” she says. “When that was happening, rather than lay there trying to fall asleep, I’d get up and paint. There’s a lot of paintings that I’ve started or finished at 3 a.m.”

Nouel Riel, a multi-medium artist based in La Quinta, Calif., has found that her creativity is the opposite of Frei’s. “I get much more focused work done when I start working straight away when I wake up. I’ll have tea and a little snack, but besides that I’m working right away,” she says. “I think the sleepless, miserable artist is a false narrative that’s been sold for a long time so money can be made off of dead people like Elliot Smith and Van Gogh.”

For Sibinski, Saturday mornings — when she’s free from her day job and she can get to her studio around 7 a.m. — are her favorite times to create. Markus’s creativity, however, hits between noon and 3 p.m.

What the sleep experts say
“There’s a myth that the spark of creativity happens only at midnight,” says Ehrnstrom. However, that doesn’t mean that late-night creativity can’t happen. “There are creative people who have never been good sleepers. They remember being up all night coloring or reading books and that’s just their circadian rhythm driven by what’s going on in the creative part of the brain.”

The key, she says, is to track your creativity habits over a week or two to pinpoint the best time for you.

You can also get a better idea of when your creative potential is at its highest by understanding your chronotype — genetically pre-determined circadian rhythms that can help discover when our energy levels are at their highest. You may not be an “owl,” who gets their greatest amounts of energy late in the evenings, but you may be an “eagle,” with peak energy arriving in the afternoons, or a “heron,” who gets their jolts mid-morning and mid-afternoon. Determining your chronotype could be a great way to organize your schedule for optimal creativity and productivity.—

Be prepared for inspiration to strike around sleep

Despite the variation in the times they feel most creative, Frei, Markus, and Reil all have one thing in common: Fleeting moments of inspiration surrounding sleep.

When Reil wakes up from a dream, she jots down a few lines in her phone’s Notes app or records a voice memo of what she remembers. Markus also uses her phone’s Notes app. “Sometimes in the middle of the night I’ll wake up and add to my Late Night Ideas notes. It’s random long scrolls filled with typos and half-baked ideas, but when I’m tossing and turning, I sometimes have a lot of ideas about my business and what I could do differently to grow,” she explains.

Frei likes to rely on a traditional notebook or her iPad. “Every now and then, I’ll have dreams about paintings or ideas for paintings. I’ll wake up and try to do a super basic sketch of something. I have a notebook and my iPad on my bedside table so that I can do that stuff,” she says.

What the sleep experts say
In addition to testing creativity by sleep stage, Lacaux’s study also tested Thomas Edison’s napping technique. Famously opposed to sleeping, Edison claimed in an 1889 interview that he never slept for more than four hours a night. Instead, he’s said to have relied on short naps throughout the day, a task he carried out while holding a ball in each hand so that, as he fell asleep, they would drop and wake him up.

Edison claims that this helped him remember his dozing thoughts, so Lacaux had her subjects hold a plastic bottle while they slept. While she found that though Edison’s technique doesn’t precisely catch the N1 creative sweet spot, she did find that holding an object can help wake subjects before they drift into deep sleep.

Lacaux suspects that this might have to do with the synergy that happens when the mind wanders, like when we’re driving or showering. With more research, “in the future we could develop technology that targets this creative sweet spot and wakes the participant up when they reach it,” she says.

In the meantime, if you want to try the Edison technique at home, Lacaux says that the key is using an object that’s heavy enough to make a sound when it falls, but not too heavy that it will pain your arm to hold onto it.

While it can be tempting to romanticize the idea that we must sacrifice sleep for the sake of art or creativity, the science doesn’t support it. Though schedules and routines are best determined by your body’s natural rhythms, sleep remains an essential part of all of our creative toolkits. And who knows? Getting a good night’s rest could provide just the creative breakthrough you’ve been looking for.