“There’s a lot of power in saying no to things.” 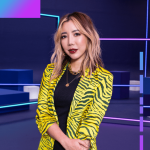 In 2015, I was DJ’ing four days a week, back-to-back. When I was touring in Europe, my schedule got even more aggressive. It was pretty exhausting, and it ran me ragged. Sometimes, when I’d return home to L.A. from trips, I’d get really sick or need to stay in bed for a day. It would take me the rest of the week to recover.

I’d been suffering from migraines for about 10 years at that point. I consulted multiple neurologists in college, and my scans were normal — except for this one little area where the vascularity in my brain was shrunken by 60 to 70%. It was only in this section, so doctors thought it was an anomaly. All but one of them told me, “It's not a big deal.”

Then, in the fall of 2015, I had this weird episode where I was walking, and suddenly, I couldn’t feel my foot. It was a bizarre sensation, like I had a ghost foot. It felt like, as I put my foot down, there was nothing to stop my body from hitting the ground. It scared me. I went to the doctor and they ordered another MRI.

That’s when I was diagnosed with Moyamoya. It’s a rare blood vessel disorder where the carotid artery in the skull becomes blocked or narrowed. So tiny blood vessels develop at the base of the brain to compensate. Moyamoya means “puff of smoke.” That’s because in a scan, the arteries that feed your brain look like branches of a tree. But when you have Moyamoya, it looks like a puff of smoke because the branches are now getting shut off. If left untreated, most people with it die before they're 40. My disease was so advanced that I was basically a ticking time bomb by the time I was diagnosed. At any moment, I could have had an aneurysm or a stroke.

The following month, I had two brain surgeries, one week apart. I'm alive through the miracle of science. Today, my doctors have told me I can live without restrictions. But while I was recovering, I briefly lost language and my motor and comprehension skills. I had acute aphasia, and I couldn’t understand what people were saying to me. I felt like I was in Charlie Brown. Instead of words, it sounded like everyone was talking through trombones and trumpets. And I could not speak to anyone, either. The worst part was that I couldn’t really hear or understand music.

After two months of recovering at home, I was back to about 80 or 90% function. Being on a regimented schedule helped a lot. I stopped drinking. I wasn’t working. I was just focused on recovery. And when I was on this rigid schedule, I actually slept better, too. Even though my brain was still recovering from surgery, the rest of my body became really healthy. And I realized that my lifestyle was leading to this deficit in my quality of sleep.

My attitude towards work changed a lot. Because I have Moyamoya, I don’t want to overstress my body. I will always be slightly more at risk for specific medical issues (like stroke) compared to other people. So, I’ve tried my best to stop over-committing and over-obligating myself.

When I do travel for work, I have lots of hacks to streamline the process. I have one travel purse that already has everything I need inside. My passport, my AirPods, cables, hand sanitizer, lotion, earplugs, mask, medications — they don’t leave the bag. I also have a toiletry bag that's exclusive for travel. In my “gig bag” with my laptop, I always pack non-perishable foods like protein bars or jerky, just in case I can’t sit down for a meal before a show.

I set my sleeping and eating schedule to my destination the second I step foot on the plane, to fight jet lag. Sometimes that means turning down the meal service if it’s not the right time to eat. Adjusting in advance helps reset my circadian rhythm.

And when I get home from a trip, I always take the next day off to relax and decompress. Now that the world has opened up a bit, I'm on the road more often. But I try not to perform for too many days in a row. When I start getting into two to three shows a week, it takes a heavier toll on my wellness. If I go out for one show and come home, it doesn't disrupt my sleep or my health too much.

Anytime you have these life-affirming situations or anything that's really traumatic, you learn lessons from it. You're shown how easy it is for you not to exist. For me, the lesson was that self-care is essential. And that there’s a lot of power in saying no to things. I have a constant reminder not to sweat the small stuff. Life is too short. Just do the things that make you happy, think about yourself, and make art that brings joy to you and others.

A jet-setting DJ and music producer, TOKiMONSTA sets her own beat. Her entire discography has drawn critical praise from the most notable news outlets in the world, including NPR, Rolling Stone, the New York Times, and others. She's a Grammy Award-winning producer, artist, and Asian-American woman who has seen firsthand the power of sleep.

Learn more about Unjunking Your Sleep with TOKiMONSTA.
Read Next:
It's Time to Unjunk Your Sleep
And our new super-team — including a doctor, a DJ, and a CBD chef — is here to help. Are you ready?
Learn more
TOKiMONSTA Proves You Don’t *Have* to Be a Morning Person to Be Successful
The Grammy-nominated music producer taps into her most creative self — and finds her groove — at night.
Learn more
How to Sleep Well When You’re Traveling Across Time Zones
Get the rest you need even when you’re on the other side of the world.
Learn more
Is There Such a Thing as Good Sleep?
Yes. But good sleep is more than simply clocking eight hours. Here’s how to tailor your definition of quality sleep for noticeable results.
Learn more
How Important is Sticking to a Sleep Schedule, Really?
Maintaining a regular bedtime and wake-up time is great for your sleep. But what happens when sticking to it is impossible? We asked the experts.
Learn more
Recommended for You
Food Coma Is the Real Deal — Here Is How to Avoid It During Thanksgiving
Learn more
How Aromatherapy Can Help You Sleep
Learn more
How Important Is Deep Sleep, Really?
Learn more
Why Is Seasonal Affective Disorder So Bad This Year?
Learn more
How to Sleep with Shoulder Pain at Night
Learn more
8 Expert Tips to Help Babies Sleep Better
Learn more
Trending Now
What's Waking Americans Up at Night
Learn more
20 Sleep-Deprived Cities in America
Learn more
6 Foods That’ll Help Make You Sleepy
Learn more
The Surprising Effect Summer’s Long Days Have on Americans’ Sleep
Learn more
27 Top Sleep Questions, Answered by the Experts
Learn more
About Sleep.com
Learn more