He’s in the best riding condition of his life, and bringing new meaning to the term “sleeping like a baby.” 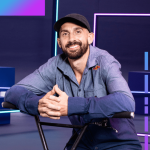 When our son Ledge was born, I was 35, and although I was still competing, I kind of thought my better years were behind me. It’s not that I had given up on myself, but more than a decade had passed since being voted by my peers as Nora Cup Flatlander of the Year, in 2005 and again in 2008. I thought there was no way I was going to win another of these awards. I never stopped competing, but I had stopped paying attention to the details that were putting me onto the podium.

Coming back to the roots of peak performance

But just a few months after Ledge was born, I hired a coach — Martti Kuoppa, a legendary flatland athlete from Finland who had recently retired. Right away, he let me know what he saw as areas of growth.

He told me I needed to pay attention to things like losing a bit of weight, eating proper foods, and of course getting good quality sleep to give me that energy to last throughout the day. It took a little while, but once I started to put all that together, meeting those goals became my top priority. I decided to make the change, to get my body in shape, and fix my nutrition, and work on my sleep, it almost became the same obsession that I had when I first started riding as a teenager.

I was working on my sleep at the same time my wife and I were working on Ledge’s sleep. We made sure to keep him on a tight nap schedule, with bedtime every night at 7:30 p.m. It just made sense for me to get on his sleep schedule as well.

Sleeping earlier gave me more energy during the day for riding, but I noticed how my new lifestyle goals benefited me off the bike as well. It was helping me be a better husband, a better dad, a better rider, and a better athlete. The more energy I had, the more I was able to link it to my nutrition and my sleep.

You often hear parents say their kid didn’t get a good sleep, or their kids woke up early from their nap so they’re not in the best mood, and after you have your own kid, you get it.

As I started to observe Ledge, after those nights when he didn’t follow his natural sleep pattern, or when we had to keep him up until 10:30 p.m., I could tell a difference in the way he was the next day. Seeing Ledge be happier the next day, after getting quality sleep, really made me pay more attention to myself a bit more.

And the moment I started to prioritize my sleep, I started to be hyperaware about the way I felt the next day — the way I engaged in conversation, how consistent I was on my bike the next morning, and how much energy I had in my second or third riding sessions. The way my mood to alertness levels would change... I’m basically shooting myself in the foot if I don’t get that good seven or eight hours of sleep.

I watched my son’s sleeping habits, and how it helped him, and the experience just kind of transferred over into me wanting to pay attention to my own sleep as well.

There are also additional techniques I’ve had to incorporate to fine-tune my sleep. I’ve started meditating every morning. I don’t drink any alcohol in the lead-up to my competitions. I’ve cut way down on screen time after 6 or 7 p.m. I’m keeping my mind as blank as it can be, so that it’s less jumbled when I do lie down, and all I have to do is focus on my breathing.

The results have returned me to the top of my sport.

I never thought about winning the Nora Cup Flatlander of the Year award again, but in 2020, I was presented with the award for the third time ever. Going into end of year three of this comeback, things are starting to click. I almost feel like my career is starting over again.

Terry Adams is a pioneer in flatland BMX.  In 2020, Terry began putting his sleep first, and came back to win the Rider of the Year award. These days, in between competing and continuing to pioneer his discipline, Terry is widely regarded as the ambassador for flatland BMX, taking part in demos and competitions all over the world.

Learn more about Unjunking Your Sleep with Terry Adams.
Unjunk Your Sleep
It's Time to Unjunk Your Sleep
And our new super-team — including a doctor, a DJ, and a CBD chef — is here to help. Are you ready?
Learn more
What Is Junk Sleep? And How to Fix It
You may have seen the popular commercials starring Liev Schreiber. So, what is Junk Sleep anyway, and how do we get rid of it?
Learn more
I Tried Pro-Athlete-Approved Pillows and This Is How I Slept
What was it like to sleep on Molecule's recovery-focused bedding, like Alex Morgan, Michael Phelps, and Russell Wilson?
Learn more
Tart Cherry Juice Is How Some Athletes Restore Their Body
Elite athletes, like Aly Raisman, are turning to tart cherry juice to wipe away their sleep struggles. Here’s how the fruity elixir may get you more shuteye.
Learn more
Meet Your Sleep Guide: Terry Adams
Learn more
Recommended for You
Discover Your Chronotype for Better Health, Sleep, and Productivity
Learn more
How Music Producer TOKiMONSTA’s Near-Death Experience From Moyamoya Disease Changed Her Approach To Self-Care
Learn more
How Do Lullabies Benefit Babies’ Sleep and Brain Development?
Learn more
15 Bath Products by Dr. Teal’s, Ranked
Learn more
How Much Rest Should You Get After the COVID-19 Vaccine?
Learn more
How Caring Too Much About Sleep Becomes Sleep Anxiety
Learn more
Trending Now
What's Waking Americans Up at Night
Learn more
20 Sleep-Deprived Cities in America
Learn more
The Surprising Effect Summer’s Long Days Have on Americans’ Sleep
Learn more
27 Top Sleep Questions, Answered by the Experts
Learn more
6 Foods That’ll Help Make You Sleepy
Learn more
Box Breathing Is Our Number One Trick for Getting Yourself to Fall Asleep
Learn more