Power Nap Like the Pros from NASA – Here's How!

Power napping has been shown to boost productivity, energy, and performance in all types of people, even NASA astronauts. In order to experience these benefits, it’s essential to nap the right way. Below, we explain how. 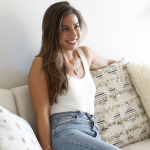 There’s no doubt about it: Power naps feel amazing. But, how do you pull one off without wanting to stay in your cozy bed for hours on end?

Before we dive into the details on how to power nap properly, let’s discuss what a power nap actually is. Power napping is a short period of slumber that you purposefully wake yourself up from before reaching deep sleep, also known as slow-wave sleep.

It turns out that NASA astronauts helped the world find out how to pull off the optimal power nap.

After years of research, NASA scientists found that power naps were able to boost their pilots’ performance by 34% and improve alertness by up to 54%.

The team at NASA determined that an optimal power-nap time should be anywhere from 10 to 20 minutes. If you sleep longer than 20 minutes, there's a greater chance you’ll fall into REM (rapid eye movement) sleep, which can impair your ability to wake up feeling refreshed, alert, and powerful.

How Long Is a Power Nap?

To reap the benefits, it’s important to aim for the optimal power-nap length. A 2016 study that built on the work that NASA did found that 10-minute naps helped reduce short-term performance impairment among civilian study participants and resulted in minimal sleep inertia, a transitional state between sleeping and waking that can result in impaired performance, reduced vigilance, and increased desire to hit the snooze button and return to slumber. Comparatively, study participants who napped for 30 minutes experienced more frequent incidents of sleep inertia.

So, the next time you’re wondering how long a power nap should be, remember that 10-20 minutes is the sweet spot and 30 minutes is most likely too long. It turns out that what’s best for NASA pilots and astronauts is also be best for you and me.

The Benefits of Power Napping

Commonly referred to as a “15-minute cat nap,” power napping is something humans have been practicing for centuries. Even icons such as Thomas Edison, Albert Einstein, John F. Kennedy, and Aristotle were noted cat-nappers.

In fact, in many places in the world, midday naps are encouraged with entire towns and cities shutting down to honor this quiet time, also known as a siesta. In many Spanish countries, for example, siestas were at one time actually considered a physical necessity, alongside nutritious food, proper water intake, and a healthy community network. Many countries continue to honor siestas today.

The practice of siesta is known to provide a variety of cognitive benefits including, but not limited to, memory consolidation, preparation for subsequent learning, executive functioning enhancement, and a boost in emotional stability.

But those benefits don’t always remain static across our lifetimes. From a physiological perspective, our sleep patterns change as we get older. For example, infants’ naps are indistinguishable from nocturnal sleep, while children’s naps are predominantly NREM (non-rapid eye movement) sleep, young adults’ naps have a balance of NREM and REM, and older adults’ naps are dominated by more REM sleep.

When you reach a REM state during a nap, you’re bound to wake up more groggy. This one reason why some people choose to avoid naps as they get older.

If the “15-minute cat nap” has been known to be so beneficial, why is it not a topic of discussion for our self-care practices alongside exercise and meditation? The short answer: It needs to be done correctly. Here’s how to do it.

Now that we know true power naps should not exceed 20 minutes in length, here is some advice to ensure that you don’t drop into REM sleep and wake up feeling groggy:

The next time you feel yourself losing concentration during the middle of the day, why not take a power nap? Give us a shout on Twitter or Instagram to let us know how it went!

READ NEXT: How to Take a ‘Coffee Nap’ and Why Doomscrolling is Destroying Our Sleep