How Five Artists Used Their Bedrooms to Inspire Art

We spend almost one-third of our lives sleeping, so it’s no surprise many artists get inspiration from their bedrooms. Well-known artists like Frida Kahlo and Vincent van Gogh have incorporated their bedrooms into their art. 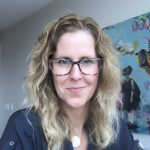 From México’s Frida Kahlo to the UK’s Rolling Stones, artists all over the world have turned to their beds to say something of who they are, who we are, in our most intimate spaces. Whether sketching an unfamiliar hotel room, learning to paint through a bedridden recovery, or recreating one’s own bed on the wall in a museum, for artists from Frida Kahlo to Charlie Watts, Vincent Van Gogh, Robert Rauschenberg, and Njideka Akunyili Crosby, art finds itself in bed with some of the most pressing social issues of our time.

In 1925, Mexican artist Frida Kahlo took up her first set of paints. After surviving a bus accident that broke her right leg, pelvis, collar bone, and spinal column, Kahlo dabbled with paint on canvas as a tool to assuage her bedridden boredom. While her family made up her first set of subjects, through cycles of surgery and recovery Kahlo truly taught herself to paint while in bed, looking in a well-placed mirror on the ceiling above her head to create her first self-portraits. In the years to follow, the artist would not only change the course of the Mexican avant-garde, she’d lay the groundwork for the collision of art and ableism, and the coming era of selfies.

Kahlo’s own relationship to the bed in recovery freed her from art school norms. Unencumbered, she found a voice and a style that took on a revolutionary fervor for self-representation that spoke to the history and future of her nation. Moving her self-portrait practice from pastime to full time, Kahlo’s explorations began to meld regional traditions with an explicitly modern willingness to divulge her inner self in paint on canvas.

The intimate tone of her work featured self-portraits in hospital beds from Mexico City to Detroit, as well as bold waist-to-head paintings recreating images of loss and accident-thwarted fertility. In doing so, she stood apart from the work of fellow members of México’s artistic circles who launched the Mexican Mural Movement, painting monumental, encyclopedic frescoes of the nation’s indigenous and colonial histories on the walls of civic buildings across México City. On the contrary, Kahlo made her own image a conduit for both the profound challenges facing a woman of Spanish and First Nations heritage.

Kahlo was not the first woman to choose herself as subject. Following in the 16th- and 17th-century footsteps of artists such as Italy’s Sofonisba Anguissola and Artemisia Gentileschi, Kahlo was one of many women to announce both their gender and profession by painting themselves into their work. This method made each painting both a calling card and a challenge to centuries of paintings that depicted women as symbols of virtue or motherhood rather than as actual, individual women. Catapulting this challenge into the 20th century, Kahlo’s fearless self-portraits inspired artists such as Cindy Sherman, as well as contemporary cis- and transgender women around the world who use selfies and social media to expand and enrich our understanding of what it is to be a woman.

For some, beds are stops on the way to the next gig; for others, they become the gig itself. While Rock and Roll Hall of Famers, The Rolling Stones, may not be known for soothing lullabies, late drummer Charlie Watts made the bed into a type of shorthand for his experiences on tour with one of the UK’s most popular and enduring rock sensations. Whether the Stones were in Tokyo or Toronto, for close to 58 years Watts kept a record of each stop by drawing a quick sketch of each hotel bed he slept in on tour.

The famed 19th-century Dutch painter Vincent van Gogh brings us what is perhaps one of the most famous bed paintings of all time in a piece titled “The Bedroom.” While recovering in Arles, France, from the infamous incident that cost the painter his own ear, van Gogh turned his talent to the painting of his own bedroom.

Working in his signature Impressionist style, which focused on light above all else, the artist removed the shadows and flattened the forms of his bed, chair, and bureau to eliminate the three-dimensional lie that realist painting always tells. The result reveals an ironically brightly colored space, where the room itself seems to stand straight up on the canvas instead of receding to an imagined horizon point somewhere behind the frame.

Floating beyond van Gogh’s rigorous painterly experiments and Kahlo’s explosion of self-portraiture, Robert Rauschenberg’s “Bed” (1955) challenges our ideas of beds, portraits, and paintings. The work is made up of the artist’s own quilt, sheets, and pillow stretched on a rectangular canvas of human proportions and hung on the wall. Given the familiarity of the materials, there is something deeply personal about the work. The quilt and pillow arrangement invite you to imagine the artist crawling into that very bed to sleep. The work may also speak to the physical bed and art-driven conversations that Rauschenberg shared for a time with his partner in life and paint, Jasper Johns.

Whether self-portrait, art experiment, or both, the work is neither an actual bed nor a painting in any traditional sense. The artist, in fact, claims that “Bed” emerged when he ran out of materials and reached for his unneeded winter quilt for a canvas. Yet the title and the splattered paint dripping across the sheets and pillowcase seem to contradict themselves. One sees the work as a direct confrontation with abstract expressionist painters like Jackson Pollock who were trying to reduce painting down to just paint and gesture on canvas. Pollock’s works in that vein are famous for the splatter effect seen in the top half of Rauschenberg’s bedsheets. Somewhere between painting, collage, and interpretation, “Bed” draws upon familiar materials and everyday objects to speak to the life of the artist while pushing the definition of painting into new and unexpected territory.

Embracing identities rooted in both her new homeland in Los Angeles, California, and her childhood home in Enugu, Nigeria, Njideka Akunyili Crosby turns to the bed and other familiar furniture to articulate the complexities of a life lived across cultures. In rooms filled with IKEA chairs and tables bought in the US side by side with a still life of her grandmother’s kitchen tabletop in Africa, the winner of the 2017 John D. and Catherine T. MacArthur Foundation’s “Genius Award” layers portraits with scenes Xeroxed and transferred from popular Nigerian magazines. As these almost-quilted images become the floor, walls, shadows, or clothing in each work, Crosby demonstrates how, for many who choose new homelands, being fully present in one space is intricately laced with awareness of life, politics, music, and culture in another.

In the 5.5 x 8 ft. work “Nwantinti” (2012), Crosby sits atop a bed with her husband’s head in her lap. Together the pair set a scene of intimacy and care, cradled in the familiarity of one’s own room and contentment found in being together. As Crosby’s deep skin takes on the beet red glow of a cement-block screen to the right of the room, the man’s white shirt, jeans, and face become the focal point of the image. Here, parts of the man’s pants are covered with stark black-and-white images of both British colonization and Nigerian resistance. The white highlights in the photos draw the eye to this point in the work: a reminder that we still wear the racial and colonial complexities of the past on our sleeves in the present.

As van Gogh’s familiarity with the way the rising and setting sun hit his bed, floor, and walls pushed the history of painting into uncharted territory, Crosby, Rauschenberg, and Kahlo’s work brings different questions and answers around race, immigration, sexual preference, and ability to the fore. As a testing ground for self-understanding to a stage for community-building among those who see themselves in each work, in the hands of the above artists the bed becomes not only a subject, but a studio, as an index of memory, experimentation, and identity.

Nikki Moore, Ph.D., is an art and architectural historian with an eye toward social justice. Her work has been published in Brazil, the UK, Mexico, Australia, and the United States.

Read next:
Want to Reset Your Circadian Rhythms? Go Camping
Research shows that spending time outside can help reset your sleep cycles. Here's why you should get outside, or five easy ways to mimic camping conditions at home.
Learn more
8 Reasons to Start Sleeping Naked Tonight
Going to bed in the buff has more health benefits than we realized.
Learn more
The Week in Sleep News: June 24, 2022
Beyonce has some self-care advice for us.
Learn more
The Surprising Tool That Reset My Sleep Routine
Incorporating the Theragun Prime into my nightly bedtime routine helped me get my best sleep in years.
Learn more
Walking Meditation Can Help You Rest Better at Night
Also called mindful walking, the practice can offer exercise and stress relief for better sleep, while getting you into the fresh air.
Learn more
Recommended for You
May I Recommend: Chore Charts for Morning and Nighttime Routines
Learn more
Plant Experts Share 13 Favorite Plants for Your Bedroom and How to Style Them
Learn more
How to Fold a Fitted Sheet the Right Way
Learn more
May I Recommend: Giving the Gift of Sheets on Mother’s Day
Learn more
12 Genius Ideas for Upcycling & Recycling Old Pillows
Learn more
What To Know About Mattress Protectors For Kids
Learn more
Trending Now
Sleep Calculator: What Is Your Best Bedtime?
Learn more
Wake Windows are the Key to Unlocking Baby’s Sleep Schedule
Learn more
Fall Asleep to These 7 Adult Bedtime Stories, Apps, and Podcasts
Learn more
Hitting Snooze Can Sabotage Your Sleep Quality
Learn more
27 Top Sleep Questions, Answered by the Experts
Learn more
How Does Heat Impact Sleep?
Learn more