My mother spoke to my siblings and me exclusively in Spanish. I’m continuing that tradition by reading Spanish stories with my daughter. 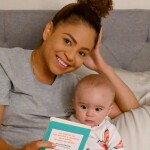 As a kid, it felt like I lived in two worlds at once. In the outside world — where I attended school, church, and other places in my New York City neighborhood — I called my favorite fruits “apples” and referred to my mom as “mother.” At home, in the inside world, they were “manzanas” and she was “madre.”

Mom always said that kids are like sponges, and she wanted my siblings and me to soak up as much of her Hispanic heritage as possible. She was especially strict about us being able to speak Spanish, the language she grew up with in Colombia. Even though my parents were fluent in English and proud to be raising us in the United States, our home often smelled, tasted, and sounded like El Choco and Medellín.

As a teenager, to balance out my further immersion into the English world (via pop culture and my school friends), she spoke to us exclusively in Spanish, and expected us to do the same with her.

“See,” she’d say after I made the translation. “That wasn’t so hard, was it?”

Continuing the tradition with my daughter

It took me years to realize that she was fostering, within me, an understanding and appreciation for both the culture I lived in and the culture I came from. Mom also knew that, professionally, personally, and culturally, having a diverse linguistic background would help me out later in life. And she was right, it has.

So, when I learned that I would be having a daughter of my own, it was a no-brainer that she would grow up speaking both English and Spanish, too. I knew that being able to do so would empower her to navigate and understand the world a little better; that it would ground her in a proud and beautiful culture; that she would always be able to communicate with her abuela and other members of her extended family.

My husband, who is from the Dominican Republic, was immediately on board. We sealed this commitment by limiting the books on our baby registry to Spanish-language titles only. As we awaited her arrival, I imagined Kaelise lying in her crib, surrounded by a world of Spanish-language adventures and fantasies that would stay with her in her dreams, and, eventually, in her everyday life.

So, here’s how it works: I bathe Kaelise around 7 p.m. each night, then we have our nightly spa time — a jade roller on her face and a few drops of lavender oil in her lotion (the lavender helps calm her) — before putting on our PJs and picking out a book. When she was younger, my husband used the “eenie meenie mynee moe” technique. I played instrumental music in the background as we read.

But as she’s gotten older — Kaelise is 6 months old now — she’s begun to assert herself more in the process, hinting at what might work best for her. “No, no, no, no, no!” she signals when I try to put on the music. And now that she’s able to sit up and grab things, we let her reach for the book she wants to read (it’s often the biggest one with the brightest colors). Then I turn on the diffuser and give her a bottle. Though things can go awry sometimes, it’s usually lights out by 8 p.m.

This routine has gone on to inspire several of my friends, many of whom are also new moms with rich cultural backgrounds that they want to pass on to their children. One friend, who is Puerto Rican and Haitian, reads to her child in French.

I think it makes my mom happy to know that I value our upbringing and that others want to replicate it.

Evolving bedtime routines as they get older

I have a bunch of Spanish books on my Amazon wish list that I plan to get the moment Kaelise outgrows her current favorites. But eventually, I’m going to have to let her decide what she’s interested in and allow her to re-structure her routines accordingly.

My sister-in-law, who has a 2-year-old, found that the normal bedtime activities were no longer working for my niece. She noticed that my niece would be too drowsy to fully participate, which prompted her to switch things around. Instead of reading in Spanish before bed, they do a Spanish exercise together each morning. My niece seems to be way more receptive to new words and ideas in the morning, and my sister-in-law is leaning into that.

While our routine has certainly been enriching for Kaelise, it’s taught me a few things, too. For one, it’s reminded me of how important it is to have a calming nighttime routine that helps you unwind before bed. I’ve been guilty of doomscrolling and being haphazard with my sleep habits, but starting this process with Kaelise has helped me remember to be more intentional with that time.

And surprisingly, reading Spanish stories with my daughter has taught me the importance of taking baby steps. As a new mom, sometimes I want her to know things right away, which can lead to frustration. But I have to remember that everything has its course, and I have to enjoy each moment because they go by so fast.

Before you know it, Kaelise, will be reading to me — in Spanish, of course, but maybe in some other language as well. I’m no rush for that day to come, but I know she’ll be ready for it.